59_main_video.gif
Terms of Use for Materials and Images Displayed on the Website © The Pushkin State Museum of Fine Arts

There is a Beginning in the End

About the Project Participants

There is a Beginning in the End. The secret Tintoretto fraternity

“Tintoretto is Venice, even if he does not paint Venice”

Special project of the Pushkin Museum of Fine Arts is devoted to the 500th anniversary of the great Venetian artist Jacopo Robusti, known as Tintoretto. The main protagonist of Tintoretto's works is the space — in his works he embodied an infinite turbulent universe. Tintoretto's approach is revolutionary for his time and close to contemporary media art: the idea of immersion into the space and the effect of being inside the depicted scene come to the fore in his art. The artists, who created installations specially for the space of the church of San Fantin, follow the same principle.

Contemporary artists rethink the innovative approach of the great Venetian master in their works and invite the viewers to immerse themselves in the universe of Tintoretto. They follow the most important themes of Tintoretto’s art: the spiritual unity of people, the miracle, as well as his mastering the dynamics of space and the expressive potential of light.

Tintoretto produced change in art that went against what seemed regular and traditional life. This exhibition is about the artist who is not looking for means of subsistence or personal comfort, but whose goal is to create artworks of great spiritual energy that change the viewer. The project consists of four different parts. Each part becomes an act which fills the entire space of the church.

In the eyes of today’s audience accustomed to scales and expression of the 20th-century Modernism, Tintoretto’s art still pushes the boundaries of what painting can say. Tintoretto’s name was re-actualized in the early 20th century thanks to Max Dvořák, a member of the Vienna School of Art, whose focus always turned to watersheds in the history of art. The art of Tintoretto was consonant with the expressionist search for formal elements, since the line and light were the artist’s main tools in designing space. Inasmuch as we see the world by the medium of light, it acts as the main vehicle for emotion.

In the mid-20th century the figure of Tintoretto became the subject for Jean-Paul Sartre, for whom the Venetian master embodied existential anguish — he was both behind his time (as the last native-born artist on a scene ruled by a cosmopolitan elite) and ahead of it (as the ideal artist for a rising bourgeoisie that was still timid to declare itself amidst the pomp and decorum of the ducal republic).

The key starting points for this project are Tintoretto’s work with the Venetian confraternities and the refraction of the theme of communion in his art — in his numerous interpretations of the scene of The Last Supper as a spiritual unity of people. The Scuole Grandi represent an important page in the history of the Venetian Republic. These communities were similar to fraternities, guilds and charitable religious organizations, but the decisive factor in these unifications was a sort of affinity of souls. The Venetian scuola is something in between medieval guild, English gentlemen’s club and contemporary NGO — that is, something truly original, specifically Venetian, and much defining in the history of Venice. It was a sort of social security system, independent of the republic’s authorities. The Scuola di San Rocco, whose affiliate Tintoretto was for twenty years, helped common people, especially during the dark period of the outbreak of plague in Venice.

It was for the first time in Tintoretto's Last Suppers that the Italian Renaissance art brought the mystical theme of communion to the fore, leaving the dramatic theme of betrayal behind. For him, it is the scene of spiritual unity in the first place. Tintoretto places the classical biblical scene in the modest furnishings of his times and portrays the participants as ordinary people. Joint efforts of the Venetians to fight the outbreak of plague — in many respects under the auspices of the fraternity of Saint Roch — make the topic of communion at the shared table especially acute. Equally revolutionary is Tintoretto’s approach to the compositions of his paintings on this topic. Starting with classical frontal composition in the early work for the church of San Marcuola, he gradually reaches the dramatic dynamism of this scene. In The Last Supper for the church of San Simeone the table is skewed off the perspective projection; flickering artificial light adds a hue of mystery to the scene. This approach culminates in The Last Supper from the church of San Giorgio Maggiore: the dynamics of the composition makes the depicted scene uprush to the sky.

The artist Dmitry Krymov has created a performative installation based on Tintoretto’s Last Supper from the church of San Trovaso. Interpreting The Last Supper, he creates another reality at the altar of San Fantin church, based on trompe-l’oeil (visual illusion), which makes the viewers doubt the accuracy of their perception. Krymov produced this installation jointly with the team of the Pushkin Museum Department of Cinema and Media Art. The museum’s participation in film production has transformed its status from a simple witness to the initiator of creating the “new classics.”

In the San Trovaso composition the artist placed the sacred scene in the modest basement and portrayed its participants as common people surrounded by everyday details. However, the scene is filled with dramatic energy due to compositional effects: the usual perspective is broken, and the participants are involved in the dynamic circular flow of what is happening. Tintoretto’s experimental approach was so much ahead of his time that Jean-Paul Sartre called him the first film director in history. Krymov, in turn, develops the multi-layered background of The Last Supper, places the scene in contemporary setting and combines cinema and performance in his work.

The media installation by Irina Nakhova consists of three parts, each of them referring to particular works of the Venetian master. All of them rethink biblical scenes from the perspective of experiencing contemporary history. For Nakhova, Tintoretto’s outstanding feature is his ability to show the emotionally intense dynamics of a human mass. Nakhova connects the cosmic scale and extraordinary swiftness, with which the depth in Tintoretto’s paintings unfolds, with the cataclysms of today. The turbulence of terrestrial matter finds its way into the outer space, which is difficult to conceive, but can be felt through the dramaturgy of Nakhova’s media works.

A prominent American media artist Gary Hill splits the elements of Tintoretto’s paintings into spectra and neurons and creates from them a highly visceral space of electronic sound and image. The artist works much more from the idea of mind space rather than architectural space. It was for the first time in the works of Tintoretto that space from a simple backdrop turned into a medium of emotion. Glowing contours, transparency and incandescence of Tintoretto’s painting reflects his attitude towards light as a matter, which surrounds objects and accepts all their properties. In The Last Supper from San Giorgio Maggiore glowing haloes of Christ and the apostles illuminate all the surrounding space with divine light, making incorporeal angels visible. Likewise, Gary Hill creates worlds tangible by all the senses and able to transform the space around. The combination of visual images and intense electronic sound allows for a deep synesthetic experience.

A painting by Emilio Vedova, Italian abstract painter and the main follower of Tintoretto in the 20th century, enters into a dialogue with the works by contemporary artists. As Vedova himself wrote, Tintoretto was one of his identifications in his understanding of space, directing rhythms and magmatic energy of passions and emotions. One of the late works by Emilio Vedova, Il Tondo, presented at the exhibition, has the shape of a circle. It reflects the concept of the circularity of time. Vedova saw the artist’s mission as to record and at the same time to re-transmit the eternal clash of situations that incessantly agitate the whole world: wars, injustice, oppression. Just like Tintoretto, he masters not images but elements and spaces. For him, the use of circular shape became a possibility to go beyond the pictorial environment through the combination of space and time. It also reminds of the compositional vortex of energy in The Miracle of the Slave – a painting that made Tintoretto famous for his innovative approach to composition.

The exhibition by the Pushkin Museum will be one of the first events to open access to the spaces of San Fantin church for the wide audience. It has been closed for renovation and will open as a cultural venue. The church was completed in the 16th century, while the first religious buildings on this site date back to the 10th century. Back in 16th century the church belonged to one of the scuole – called della Buona Morte (of the Good Death), it provided assistance to prisoners condemned to death. Scuola di San Fantin was suppressed by Napoleon, like most of scuole at that time, and the church became the university property. Inside, there were several paintings by old masters, including the Visitation of Mary to Elizabeth by Tintoretto.

The exhibition will also include a secret intervention by !Mediengruppe Bitnik, which calls the viewers to join the secret Tintoretto fraternity. The atmosphere of secrecy, communion and co-creation unite their project with the theme of Venetian scuole. 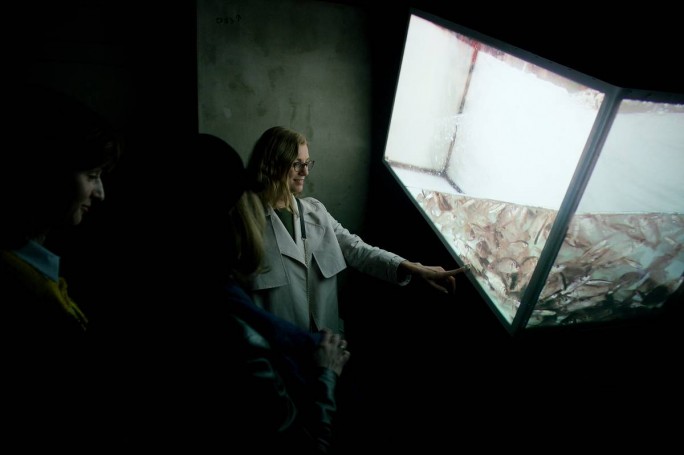 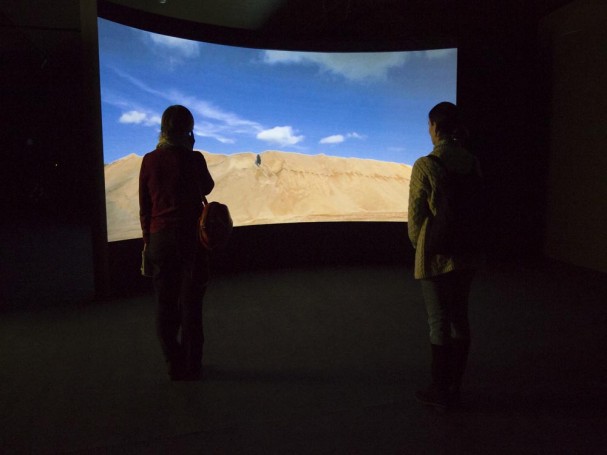 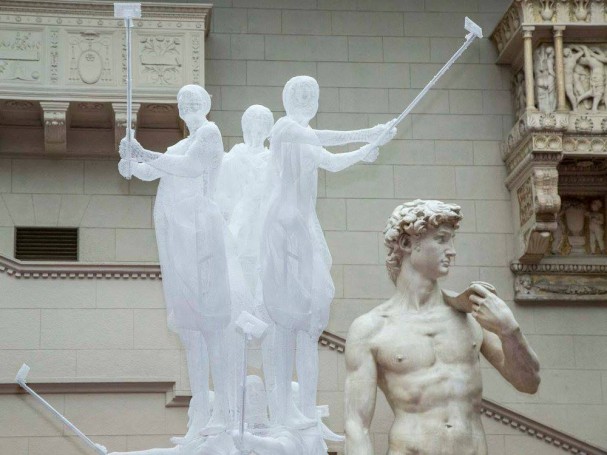 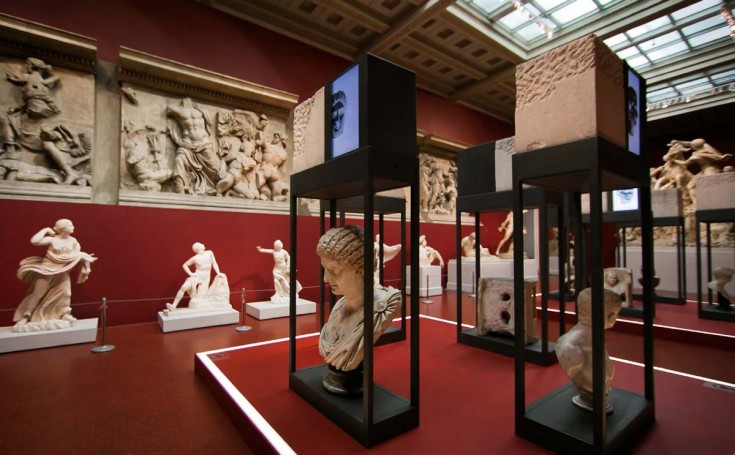 In its new projects, The Pushkin State Museum of Fine Arts is aimed to involve classical art into a dialogue with contemporaneity and suggests a new perspective for perception of widely known works. The Museum creates a new area of focus – Pushkin Museum XXI.

Pushkin Museum XXI is a program aimed to demonstrate to the visitors what contemporary art is about and to give an idea of its most prominent representatives, to show the art of modern classics who speak not only a language of pictorial art, graphic and photography, but also a language of a new forms. Video, sound, performance could fit harmoniously into the context of a traditional museum. A new media frequently transitory and ephemeral can impart a new understanding of a classical artworks making them breathe and move, involving them into a dialog with a viewer.

Pushkin Museum XXI is an innovative division of the Museum, where all forms of the contemporary art presentation from painting and sculpture to video art and virtual reality are fully involved into a dialogue.

Pushkin Museum XXI is a "Museum in the Museum". The basis of this current direction is an integration of education, research and exhibition activities, which help to develop the evolution of an artistic image from classic methods to modern technologies.

The collection of Pushkin Museum XXI will be based on the works of Russian and foreign artists participating in the exhibition projects as well as works created specifically for the Museum.

Pushkin Museum XXI projects will be also held at various venues of the future Museum District - renovated and new buildings of the District will be used for temporary exhibitions. In the future, Pushkin Museum XXI will become a separate entity and get its own building.

Page of the project on the main website of the Museum

Images of the Exhibition